Issues relating to climate change and air pollution have generated a need for adhesives that do not need solvents. These issues can be easily addressed using hot melt adhesives, which are 100% solid materials that are applied from the melt. The strength of the adhesive comes from the recrystallization and solidification of the molten polymer. Depending upon the temperature of test, a hot melt adhesive can have lap shear strengths in excess of 1000 psi but are usually less. These types of adhesives are sold as slugs (which can be used in handheld hot melt guns) or sold in bulk (in barrel or other bulk form) in which a large quantity of the adhesive is held at the melt temperature and dispensed as needed for assembly operations. Thus, the need is for formulations that have stability in the melt, reasonably low viscosity during application, and rapid strength buildup. 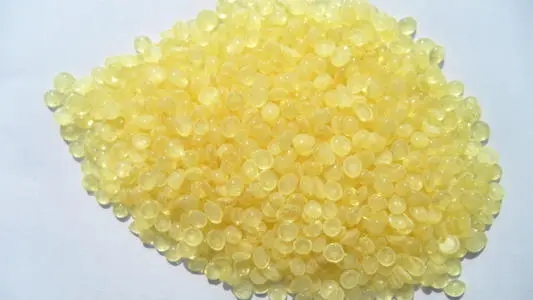 In general, hot melt adhesives come in two types: formulation design and molecular design. Formulation design is used to take a polymer that does not have all the characteristics required to make a good adhesive and use additives of various sorts to change the properties of the base polymer to make it a good adhesive. Molecular design is used to design a polymer which, in itself, is suitable as a hot melt adhesive by the choice of the proper monomers in the synthesis of the polymer.

Formulation-designed hot melt adhesives use a number of materials as the base polymer for the formulation. The most widely used material for this type of adhesive is polyethylene-co-vinyl acetate (EVA). Other materials used are polyethylene (low density), block copolymers (styrene–isoprene–styrene), phenoxy resins, polypropylene, and paraffin waxes. Paraffin, the oldest hot melt adhesive, was used as a sealing wax. As with PSAs, tackifiers are also added to hot melt adhesives to lower their melt viscosity as well as to provide tack during the resolidification of the adhesive. If one examines some hot melt adhesive formulations, one finds that the tackifier is a primary component of the adhesive sometimes used to the same level or possibly in excess of the base polymer. Another component is the addition of a wax. The wax is added not only to decrease the melt viscosity of the adhesive but also to aid in the recrystallization process. As one might be able to recount from statements made above about heat stability, an antioxidant is an important additive to hot melt adhesive formulations. Final additives include colorants and fillers.

Molecularly designed hot melt adhesives are based primarily on polyesters and polyamides. Both types of polymers start with a diacid, but polyamides use a diamine as the comonomer while polyesters use a diol. The choice of these monomers is made depending upon the following criteria:

–a crystallization rate that fits with the assembly process;

–a high degree of crystallization but with tolerance for adhesive shrinkage;

–melt temperature that is high but low enough that it does not damage equipment or adherends;

–as large as possible difference between the glass transition temperature and the melt temperature.

Hot melt adhesives have one major drawback. They are thermoplastic materials and they remain thermoplastic after application. Thus, their load-bearing capabilities are limited as is their resistance to creep. Efforts have been made in the generation of curing hot melts, that is, materials that can be hot melt dispensed but cure by a different mechanism other than the application of heat. One way of generating a curing hot melt is to include some level of unsaturation in the base polymer and include a photochemical initiator. Thus, the material would be stable in the melt but would crosslink when the solidified adhesive is exposed to light. Another way, which has been made into products, is to generate a moisture-curing hot melt.16 The adhesive, when kept in the melt at temperatures in excess of 100 °C, would have little chance of being exposed to moisture, but after application, the adhesive could easily experience ambient moisture and cure. This type of adhesive can be generated by synthesis of an isocyanate-terminated polyester. This material would be stable in the melt but upon exposure to moisture could react to generate an amine and carbon dioxide. The amine could then react with the remaining isocyanate to generate a urea, resulting in a crosslink. The isocyanate-terminated polyester could be formulated with the other materials described above, but care has to be taken to minimize reaction between the isocyanate and the other material. In addition, this adhesive has to be packaged with care in order to minimize contact with moisture.